This past weekend we lost our dog.  Good old Buddy Boy got out of the yard when we were at a wedding Saturday night, and when we got home he was nowhere to be found.  Since he has lived at our house his entire 9 years (or 63 dog years, depending on how you look at it), we figured he might just be out carousing, and would be back in the morning.  When he wasn’t home when the sun came up, we started to worry.  Taylor did some reconnaissance up and down our road, and learned that Buddy had been picked up the previous night by a spanish speaking family who had a white SUV and a white mini van who lived somewhere in our neighborhood.  They thought he was scared and lost because of some fireworks at a wedding nearby.  We located a household that matched that description, however, when Taylor stopped by only the monolingual grandmother was there and she was not able to understand his request for a dog.  In fact, poor Taylor frightened her a little when he innocently asked if there were any children at home (to translate).  Unfortunately, a big bearded man who speaks a different language showing up at your door asking for kids is a red flag.  🙂

Taylor had to leave in the afternoon on Sunday, and at the moment we only have one vehicle (Tay’s truck is broken, so we are a one Subaru family until it is out of the shop), so we just figured we’d have to wait until Monday, or hope they would stop by while asking neighbors about a dog when they got home.  Taylor was unsettled about this, and after nap time I started to get uneasy about Buddy being gone (Josephine, fortunately, had been easily distracted and not realized Buddy was MIA), so I called Ga Ga Jane to come help.  Jane, Josephine and I started driving around the neighborhood.  We stopped at the house that Taylor had already been to in the morning to see if we could get any more information from them, and this is where our great Buddy Scavenger Hunt began… 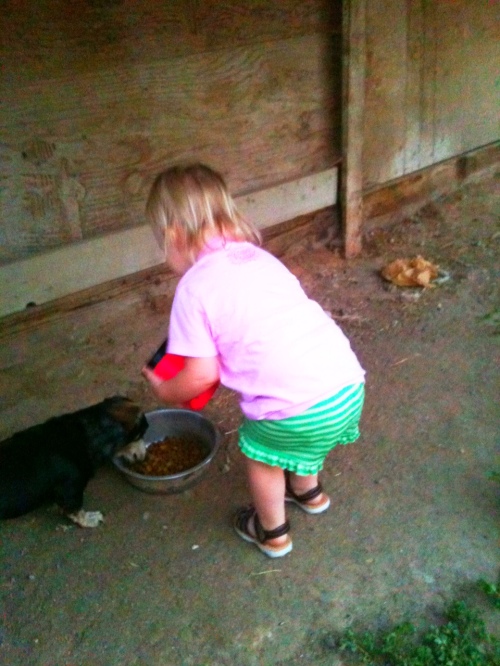 The children were home and able to give me my first clue of the day.  They had picked Buddy up the previous night, but in the morning the mother of the family decided that she thought he lived at a home down the road about a half a mile, so she had dropped him off there.  She said he ran right in the back yard, so she thought he lived there.  I tried to smile and thank her for the information, all the time thinking, “Really!?  You just dropped our dog at some house?!”  The mother nicely offered to drive me to the house, which I gladly took her up on.

So we drove down the road about a half a mile, and I spoke with a nice older man and his wife.  Lo and behold, he said that Buddy had been there (HOORAY!) earlier in the day.  He had pet him and given him a chew bone, but then Buddy took off down the road.  He apologized for not keeping him for us, but took our info and let us know that Buddy had taken off down towards the next street (Pioneer), and was last seen hightailing it in the direction of Valley Home.  I thanked him for the information and we went on our way…

We decided to drop by the big Equine Hospital on Pioneer Road.  Jane (rightly) figured if someone found him they might take him there.  Her instincts were correct, as one of the ranch hands told us that someone had been by with Buddy that day.  He said that the people who picked them up had a client on Pioneer, so they weren’t from the neighborhood, but he had directed them to a home across the street and two doors down that had a bunch of dogs.  They thought Buddy might have belonged there.  Although we didn’t have Buddy in our hands, at least we had another clue!  Off down the road we went!

Our next stop was disheartening, as the property the ranch hand directed us to was locked up.  I called for Buddy, and four other dogs came running out (some were pretty seedy looking), so I got back in the car deflated.  I started to think we weren’t going to get our little Buddy back at all.  And now, Josephine was fully aware that we were looking for him (we told her he was adventuring, and our adventure was to look for him.  She got very excited about that!), so the stakes were higher.  I was worried that some out of town family had Buddy and they would take him to a pound in another city, where he might be really hard to locate.  Ga Ga Jane, however, didn’t lose hope!  She suggested that we go next door to see if they knew anything.  I thought the people weren’t home, but Jane said to knock on the door anyways.

Miraculously, when I got up to the door I found this sticky note!

I jumped in the air and shouted, “HOORAY!”  We found him!  I called the number right away and got an answering machine message.  I left my phone number, but wanted to go pick him up right away!

Jane and I decided to go looking for the ranch that the woman on the answering machine said we had called, but when we didn’t find the ranch on Pioneer, I thought we’d just have to go home and wait.  Jane (the smartest dog finder ever!) suggested we stop by the Valley Home store, since they would likely know the ranch and the woman we were looking for.  Our local general store did not disappoint, when they said that they had, in fact, seen Buddy earlier in the day, when a person who had picked him up brought him in to ask if they knew whose dog he was.  They then politely directed me to the ranch I was looking for (go four ranches down on the right, you’ll see a pasture out front and a barn next to the house).  We were all so very happy!

When we drove up, we found the ranch owner, and we were both beaming with happiness that Buddy was FOUND!  Her husband asked me (jokingly) if I could prove he was my dog.  Just at that moment Jane brought Josephine out of the car, and she yelled, “BUDDY BOY!! BUDDY BOY!!”, and he ran right over and licked her and jumped up and down!  All the proof anyone would ever need!  It was pretty darn amazing.  We all laughed, and I thanked them profusely!  Such nice, warm, animal loving people!  They had even given dirty old Buddy a bath!  A bath!  Imagine that!  These people are so fantastic!  I am definitely baking them a thank you pie!  They welcomed me to the neighborhood, smiled big, and we were on our way home.

I just have to say…I feel so very grateful to live in a community where people are so connected to one another and where people look out for their neighbors.  In a lot of neighborhoods, no one would have bothered to pick up a stray (although I might argue that if he wasn’t picked up to begin with he may have come home on his own, but I digress), he might have been out wandering, shooed away, or hit by a car with nary a thought.   The people in my community cared enough to not only take notice of our lost dog (which speaks to country living and actually being outside), but to feed him (he was fed at least two of his stops), drive him around, take him to safety, bathe him, and post notices about him being found  around the neighborhood.  That wouldn’t happen in very many places, and I am so very thankful and lucky to live in the amazing Valley Home Community.  We love our Valley Home!  And I have to say…I didn’t realize how much we love Buddy, until he was gone.  We are so extremely happy to have our stinky little guy back home! 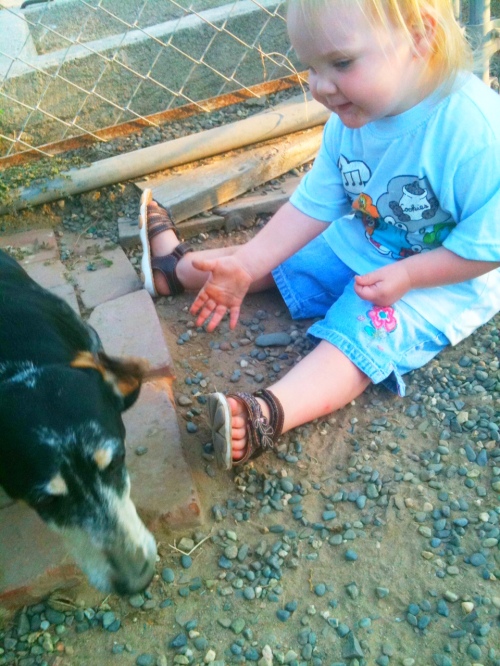 We're so glad you are home, Buddy!