What has been happening in my oh so exciting life, you ask? Well, let me tell you:
Last week while in the back pasture digging thistles in the never-ending thistle apocalypse, I lost grip on my shovel and it sprung back and smashed me in the jaw. Ugh. I had to check for broken teeth it got me so hard. Inexplicably, I have no bruise to show for it. Only a little swelling, but it totally blends in with my chins, so I doubt anyone will notice.

That same afternoon, in the far back of that same pasture I decided to pull out some stray blackberry starts (I love having the big bramble back there, but would love to keep it there, and not let it spread). All good and fine, except I was wearing a tank top an I cut the heck out of my arms and stomach (how my stomach? I am not sure). One of my colleagues suggested my antics be filmed. America’s Funniest Home Videos, perhaps?

It would have been hilarious, I’m sure, to see me yell on Tuesday night as I pulled my hip sitting down on the floor to clean up kid toys. Seriously, friends, I could hardly walk, and I’m still hobbling around. Sheesh. That life insurance policy idea is looking better and better.

In other news: I shattered my iPhone glass. Like, completely destroyed it. Luckily, Taylor is amazing and had an extra part and replaced the glass. I have some grey spots around the bottom of the screen. All in all not a total loss, but since I do all my blogging on my phone, it’s a slight inconvenience. Just slight.

Also, we added a new member to our bustling little family. Everyone, meet Ricky

We adopted him from the shelter and he’s a pretty good boy. He was someones baby dog, so it’s been an adjustment to life outside, but he seems to be adjusting alright. Now if he’d only learn his name and come in from the pasture when called, we’d be in business. Of course, he has a lot to live up to, since Buddy is the golden child. He lived up to his reputation on Saturday afternoon by killing and eating a baby possum (whose mother just might have been the sneaky pete who was under our house for a week).
*DISCLAIMER ~ graphic dead possum pic* 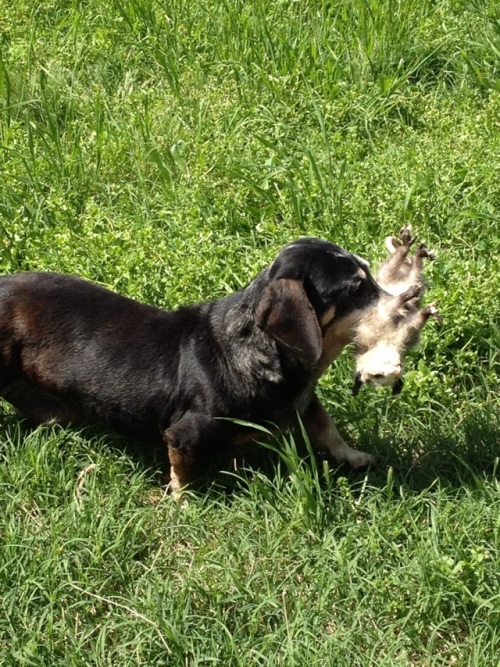 And finally, a big congratulations to some lovely friends who gave birth to a perfect little boy this week. It’s baby season here in Oakdale! This was the first of five babies due in the next couple of months. Baby spring fever, here I come! Particularly since my “baby” is actually a giant two and a half year old with a mean case of the “Mama can I’s”. I mean, just look at her. A baby no more.

(this is her irrigating outfit, by the way)

Until I fall again….(which should be later tonight by my calculations) 😉