Yesterday I spent all day at the old homestead.  We are getting closer (hopefully) to the big move in, so I thought I’d spend my Wednesday off working to get us in the house more quickly.  After a late start due to a late sleeping toddler (Really, Josephine?  8:40.  Why can’t you do that on a Saturday?) and subsequently a late drop off to GaGa’s house (Code Name for Grammy Jane, courtesy of Ms. Josephine herself), I was ready to go bright and mid day early.

I spent the first part of my morning chasing asshole goats around the yard.  One goat in particular took great pleasure in (excuse the language) fucking with me.  She would look at me, jump up on the metal structure in the pen, look at me again to make sure I was watching her be an asshole, and then jump over the fence into the yard.  This happened FOUR TIMES!  Every time I would herd her back into the pen (thanks for the help Buddy, old dog) she would wait for me to get back to the house and out the gate until she would jump again.  And again.  And again.  And then again just for fun.  I screamed at her, I threatened her, and then I remembered what Taylor, my lovely fiancé, did to get the asshole goats to stop.  I used boards and large pieces of wood we have laying around to prop up and make a makeshift fence against the metal structure that asshole goat was using to make her escape.  Taylor is smarter than a goat.  I, apparently, am not.  I lugged the boards, and rearranged the boards (because the asshole goat figured out how to move the boards on her own.  Dumb smart goat), and then finally they were trapped.  Or rather, I’m pretty sure the goat just gave up fucking with me.

Next I moved into the house, where I cleared out debris and organized tools (which, in all reality, just made it difficult for Taylor to find stuff today).  It was pretty uneventful, but I felt totally proud of myself lugging the bathroom vanity out of the house and into the barn all by myself (MUSCLES!).  After some milling around the house and freaking out that I actually OWN this cool house and will live there (hopefully) soon, I decided to move into the yard.

Look how nicely I stacked the various construction items 🙂

Now, last week when I was out there with Josephine I started weeding the dog pen (because Buddy deserves a beautiful place to sleep too, you know).  Have you ever weeded a dog pen that has been neglected for a while?  Holy Hell!  I didn’t realize what I was in for.  First off, I had my spunky little girl with me, as I mentioned before.  Josephine was playing quietly in the dirt…picking dirt up, throwing dirt down, picking dirt up, throwing dirt down, Buddy was happily scooting around the yard, and I was decimating some weeds.  All of a sudden I smelled a foul stench that I quickly identified as a dead something.  I looked around and realized that Buddy was rolling around on top of a decomposing gopher carcass that had maggots (barf, vomit, upchuck, sick) crawling out of it.  Real classy, Buddy.  Real classy.  Josephine, without missing a beat, looked at Buddy and said, “Buddy rolling.  Josephine rolling too!”  and quickly dropped to the ground.  One foot from the maggot (barf, vomit, upchuck, sick) infested gopher.  So, so gross.  And so I grabbed her, got the heck out of the pen, disposed of the nasty vermin, and tried in vain to spray the dog off/keep him from licking my precious baby with his maggot (barf, vomit, upchuck, sick) mouth.  Gross.  Needless to say, we watered some tomato plants and hit the road (not before an asshole goat head butted my child, but that is a story for another day).   Back to the day at hand.  Yesterday, without Josephine, and keenly aware of rotting rodents, I proceeded to spend over two hours weeding the dog pen.  I lugged so many weeds out of that pen in a large trashcan, it was amazing.  Two trips to the trash trailer in I realized that a half trashcan of weeds may be heavy, but a full can is damn near unmovable.  I had to fight the urge to give in and just “come back to it later” (because I have so much time) pretty much the entire time.  But with some positive self talk (you can do this Emily!) I got it done.

A lesson in unmovable objects. I had to empty half of this just to get it to move!

In the end, my dog pen is looking beautiful, the asshole goats are still trapped in the pen (or so they want me to believe), and I learned a valuable lesson about letting a child play in a neglected dog pen (wow, that sounds bad.  You think I’d have had more sense than that in the beginning).  And so it begins.  Today my body is sore, but my dog is sleeping in a weed free pen.  Sounds like a good trade off to me! 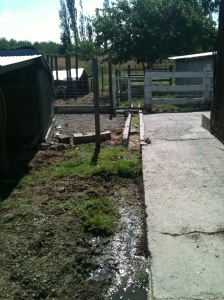 And after...Weed free for you and me!

This entry was posted in Uncategorized. Bookmark the permalink.

One response to “Goats, Weeds and Dead Things”